Good evening. It is an honour to have been asked to speak this evening and I’m grateful to Lady Sondes, Sir David Melville and Chris Wright for their invitation. As I prepared for this evening I wondered if I had ever given a talk on the water. I thought I hadn’t and then I remembered I once spoke at a conference on board a cruise ship between Genoa and Marseille. I’m pleased to say I’d trade the crystal waters of the Côte D’Azur for the muds of the Côte de North Kent any day.

We are lucky to be here and lucky to be part of Faversham. Simon Foster mentioned the work I’m involved in that’s looking at the UK 50 years from now. This may seem like a long time but it’s a drop in the ocean/Creek for Faversham. Here we have at least 9,000 years of continuous human habitation. There aren’t many other places in the UK that can claim this. In fact we don’t yet know of any that can.

And why did people first come here and then stick around for so long? It’s the Creek. First for the hunting: its game, its fish and its fowl. Then for its waterborne trade. We are one tide from London, where merchants could poise offshore, like greyhounds in the trap, waiting for fire signals from London to tell them their stock prices were high enough to catch the next tide in.

This place is important. This water is important. Many of us feel this viscerally. Others still need persuading. How can we do that?

I have seven thoughts. END_OF_DOCUMENT_TOKEN_TO_BE_REPLACED

In public contributions at this evening’s Faversham Town Council meeting, Gulliver Immink suggested the Council forms a Planning Committee to better inform itself on development applications across the town before they come to the Council for decision. At present the Council considers complex applications one by one, in short order and without the opportunity to digest the multitude of issues they raise, not least the way that one application impacts on others and on the existing town. A Planning Committee would help to prepare the ground for Council meetings, analysing applications alongside each other so that a picture of Faversham could be formed in the round.

In response, Councillor Simmons said that he didn’t think such a committee would save anyone any time in making a decision. But surely this isn’t just about saving time – it’s about getting it right.

And perhaps a Planning Committee might indeed save time. Time spent at the early stages of the planning process can pay dividends through more effective public consultation, a stronger influence on planning proposals and, as a result, a better long term outcome for the town.

I asked Helen Whately MP on Twitter whether she agrees with her constituents that the proposals to change Faversham’s county council boundaries are wrong and got this response…”I agree”.

It’s a helpful clarification – but wouldn’t it have been better if she had said this in the letter itself?

The Local Government Boundary Commission is carrying out an electoral review of Kent County Council. Radical changes are proposed for Faversham.

In the current situation, the “Faversham Division” closely matches the urban footprint of the town. This can be seen in the green line that encircles Faversham in the map above. The Faversham Division is then surrounded by the “Swale East Division”, an entirely rural division.

The proposals create a new division, named “Mid Swale”, which stretches from the edges of Sittingbourne in the west to the middle of Faversham in the east. Mid Swale therefore includes all of Faversham’s Priory Ward  and St Ann’s Ward and the western part of Watling Ward.

“Swale East” is reduced in overall size but extended to take in Faversham’s Abbey Ward and the eastern part of Watling Ward.

Faversham therefore sits across – is divided by – two divisions: Mid Swale and Swale East. Note – there’s no mention of Faversham in either of these names. Faversham has disappeared as a Kent County division.

Electoral boundaries can be read as a symbol of urban status. Zoom out and look at the current situation:

Faversham can clearly be seen  in the upper middle part of this image, sitting among a network of urban settlements, including Sittingbourne, Canterbury, Deal and Ashford. 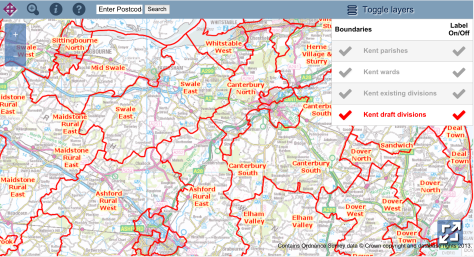 Now take a look at the proposals: Sittingbourne, Canterbury (modified), Deal and Ashford are still there. But where’s Faversham?

What does this say about the town’s status? It’s certainly not a promotion.

The divided town of kings has disappeared.

What do you think about the proposals? To have your say, please visit the Local Government Boundary Commission website.

The Faversham Conversation is also running a poll on the proposals. Please vote below: