The Local Government Boundary Commission is carrying out an electoral review of Kent County Council. Radical changes are proposed for Faversham. 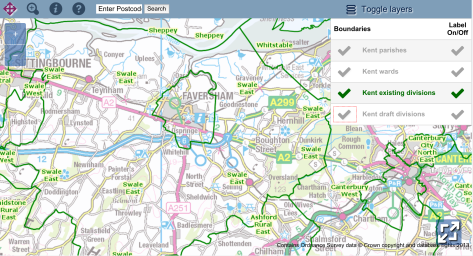 In the current situation, the “Faversham Division” closely matches the urban footprint of the town. This can be seen in the green line that encircles Faversham in the map above. The Faversham Division is then surrounded by the “Swale East Division”, an entirely rural division.

The proposals create a new division, named “Mid Swale”, which stretches from the edges of Sittingbourne in the west to the middle of Faversham in the east. Mid Swale therefore includes all of Faversham’s Priory Ward  and St Ann’s Ward and the western part of Watling Ward.

“Swale East” is reduced in overall size but extended to take in Faversham’s Abbey Ward and the eastern part of Watling Ward. 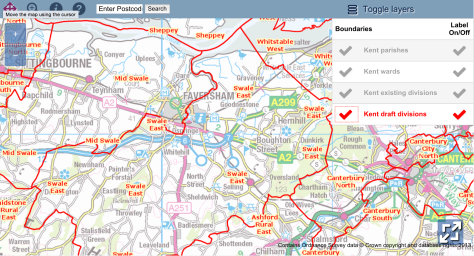 Faversham therefore sits across – is divided by – two divisions: Mid Swale and Swale East. Note – there’s no mention of Faversham in either of these names. Faversham has disappeared as a Kent County division.

Electoral boundaries can be read as a symbol of urban status. Zoom out and look at the current situation:

Faversham can clearly be seen  in the upper middle part of this image, sitting among a network of urban settlements, including Sittingbourne, Canterbury, Deal and Ashford.

Now take a look at the proposals: Sittingbourne, Canterbury (modified), Deal and Ashford are still there. But where’s Faversham?

What does this say about the town’s status? It’s certainly not a promotion.

The divided town of kings has disappeared.

What do you think about the proposals? To have your say, please visit the Local Government Boundary Commission website.

The Faversham Conversation is also running a poll on the proposals. Please vote below: