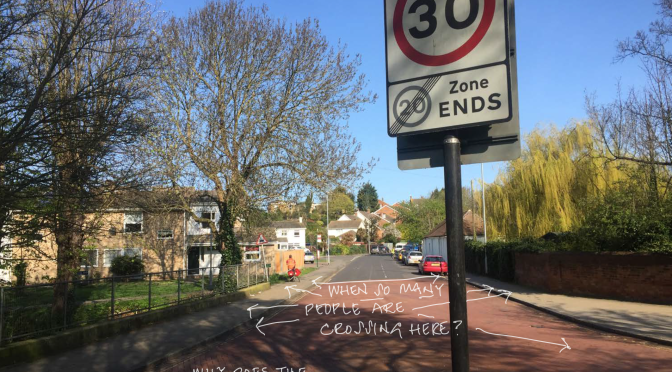 I have offered to help Cllr Antony Hook investigate ways of improving the crossing of West Street at the Stone Bridge: the bridge that spans across the Westbrook at the bottom of Tanners Street. He is responding to a number of approaches from people concerned that crossing at this point is unsafe for pedestrians. It’s a highly used crossing point for people walking to and from the town centre. It’s heavily used by schoolchildren, including many young children walking to Davington School:

These are some first thoughts for how the crossing could be improved.

I’ve started by making some brief observations of how people are currently crossing:

These initial observations indicate that people are crossing along the entire width of the Stone Bridge. A fuller survey would be better but my experience over the last 15 years or so suggests that what I observed here is a common pattern. 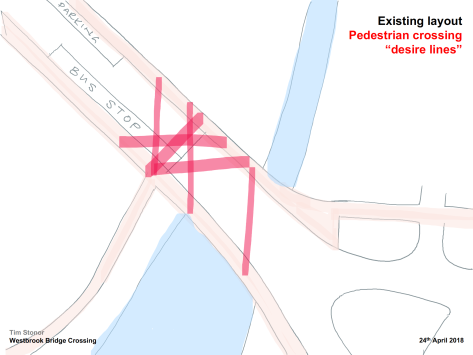 Could a design solution allow the existing “desire lines” to be preserved so that people are not diverted onto a narrowed crossing point?

Start with speed reduction: 20sPlenty
Reducing the speed at which people drive would make a difference. As an immediate step, the existing 20mph zone on Tanners Street could be extended by a few metres to include the Westbrook Bridge. At the moment the zone ends at the bottom of Tanners Street. It seems odd that drivers heading west from Tanners Street are given a signal to increase their speed to 30mph at just the point where many pedestrians are currently crossing:

Then narrow the roadway
In a similar vein, it would be helpful to narrow the width of the roadway which, like many of Faversham’s streets, is much wider than necessary. If the roadway is narrowed then it’s quicker for pedestrians to cross and it means that vehicles have to wait less time for them to do so. It’s win win.

Narrowing also creates the impression to drivers that they are driving faster than at the same speed on a wider road. This helps with the self-enforcement of speed limits.

I have looked at three options for narrowing the roadway.

My concern about a pedestrian island is that it would not be wide enough to comfortably accommodate a buggy or a wheelchair. It would also send a “cars first, pedestrians second” message to road users.

Second, Ive looked at widening the footways on both sides of the road:

Third, I’ve looked at widening on the north side only:

This options seems to have several advantages: a) this is already the narrower of the two footways, b) it would likely be cheaper to adjust just one kerb line  than both of them and c) the pedestrian sight lines towards Tanners Street and along West Street are significantly improved, making it easier for people to see vehicles and for vehicles to see them in return.

My view is that it would be best to widen the footway on the north side of the street.

What do you think?
If you use this crossing as a pedestrian then do you think it should be improved and which of the options do you prefer? Is there another way?

If you drive through here then would it make a big difference to your journey if there were a 20mph speed limit and if the roadway were a little narrower?